This came in the mail for me from a sweet friend.

I made an afghan! Last spring, Rana pointed out that, with the exception of the quilt on her bed and one sort of scratchy blanket, she only has baby blankets. Kind of hard to stay warm under a pile of tiny blankets. She asked me to make her an afghan that would cover her whole bed. I went through my pattern books and marked a few that I would be willing to make. I had just come off the dog afghan and I needed something a little bit simpler and faster after the intensity of that project. Rana chose this afghan which is featured on the cover of my “Wishes and Wonders” crochet book.

The pattern is simply named “Hearts and Flowers,” by Katherine Eng. Rana said that she liked the colors in the photo. As you can see, however, that’s not how it turned out. When I was buying yarn, I remembered it as more green rather than teal. Rana was gracious and told me that she liked it anyways. 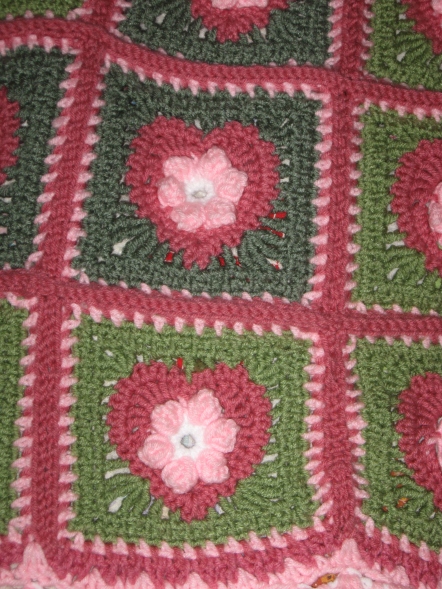 The boy and girl button-up pajamas are unisex, but I used a different pattern (McCall’s 6458) for Konik’s than I did for the girls (Butterick 5853) because of size differences. I ended up preferring the pattern I used for the girls because it was much more straightforward. The Butterick pattern was put out in 1998 (I picked it up at a thrift store), but the McCall’s is recent. I guess, in trying to improve on a basic pajama pattern, they went and made things needlessly difficult. For instance, the button placket on the McCall’s is a separate piece to sew on rather than just an extension of the front which is then folded over (how things like this are normally done). Also, there was quite a large cuff on the sleeve, which looked cute, but in practicality was a pain in the butt for all involved. First of all, I probably shouldn’t have interfaced it, despite what the pattern told me to do. It was just too heavy. It didn’t fall naturally on Konik’s wrist and, because he’s a 6 year old boy, he ended up tearing it at the seam. Repeatedly. I got so tired of repairing that stupid cuff seam, that I just tore the whole thing off. He was horrified and wailed and cried and told me how mean I was. He got over it after a day or two. That was on the monkey pajamas. I learned my lesson, then, for the train pajamas and just extended the sleeve length to account for the cuff I wasn’t going to put on it and just hemmed it in a regular folded hem. It works much better! The Butterick pattern was already written like that, so I didn’t have to make any modifications on the girls’ pajamas.

The nightgown is actually from a tunic/dress pattern (McCall’s 6500). It’s super simple with an elastic neckline and at the wrists. In fact, I have made iterations of this style numerous times, a several of which have already been shown on this blog. It’s a good workhorse.

There you are: a good dose of coziness and cuteness.

I thought today was the 15th. I was wrong. But we will pretend it is because I took a picture for it this morning.

Sitting in the living room this morning, the first one up, no illumination but that from the little tree on my circa 1940s cabinet radio. Everyone else was still asleep and I reveled in the rare silence. Only the heater vent blowing and the tick of the clock, which is as close to silence as it ever gets in this house! Fifteen minutes later, small people began emerging from their cocoons of quilts and blankets and all the morning chaos began… 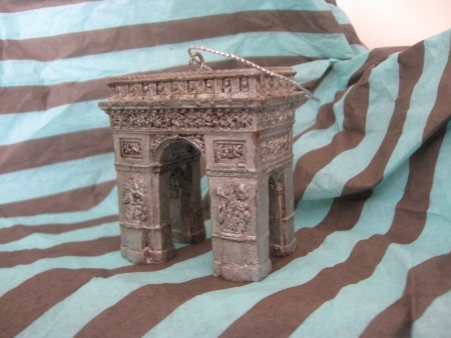 A lovely little Arc de Triomphe, thoughtfully sent to my by a dear friend in Texas who also loves France!

This is a picture 6 year old Konik drew for me a month or so ago. I have it hanging over my computer so I can see it everyday. 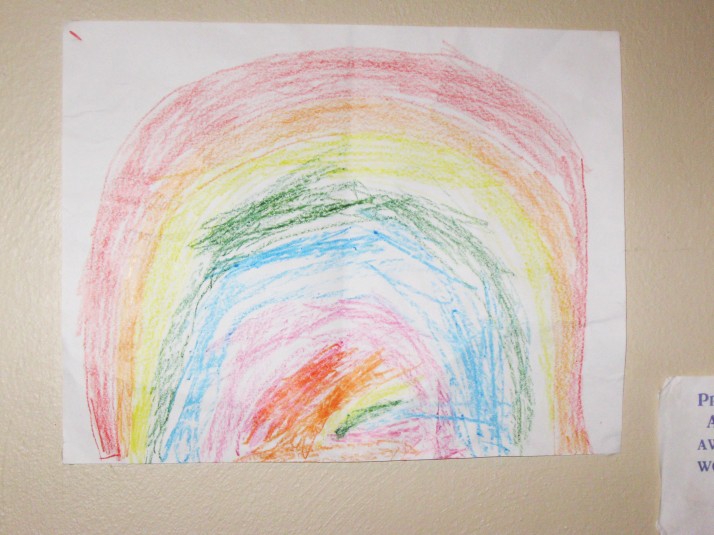 The attic is where we’ve been spending a lot of time lately. Stashing Christmas gifts, and bringing down empty boxes for packing.