When I did my study abroad in Grenoble, I chose to live with a host family rather than in the dorms. I was placed with an older lady named Hélène who lived in centre ville. We got along quite well and I loved being smack in the middle of the city. Another plus was being able to walk out the door of her 400 year old apartment building and right onto the tram which took me straight to the university. This was a wonderful bonus not only for its convenience but also because Hansel & Gretel are better with directions than I am. Not having to switch lines or even remember which stop to get off at (the university was the end of the line) saved me from inevitable backtracking and tardiness. I had never taken any form of public transportation before and the tram was a nice introduction: clean, fast, simple. 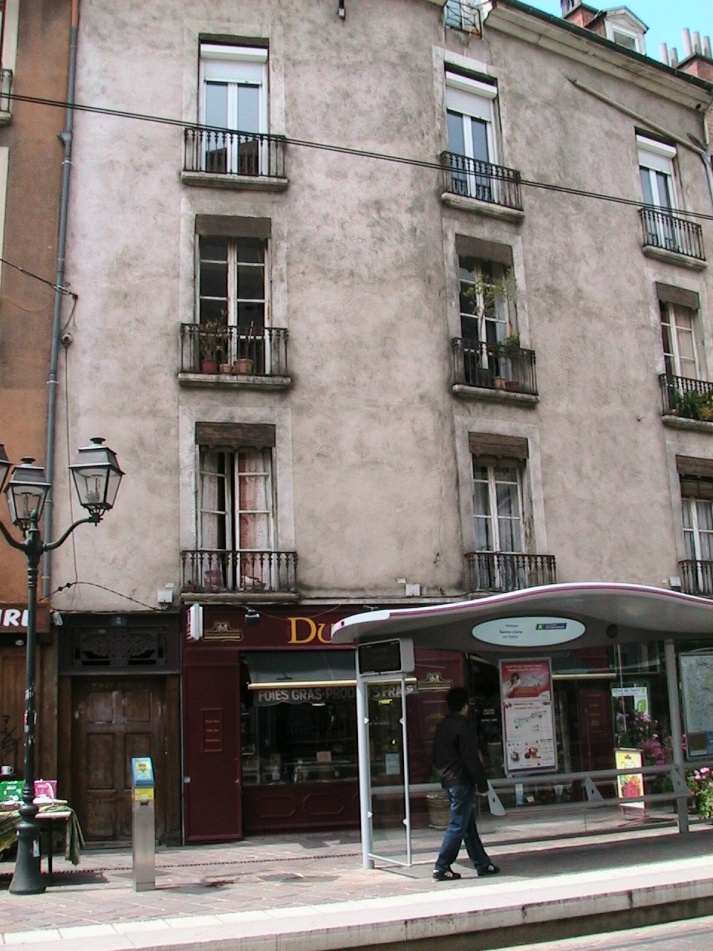 There's the door on the left and my bedroom window is the one on the far right in the middle. Great view! The tram stop is right below.

I participated in the CUEF program (Centre universitaire d’études françaises) at the Université Stendhal. All of the international students were placed in a grammar class according to their proficiency level in French. The grammar classes had from 15-20 students and met every morning; in the afternoon we had elective classes, divided  into merely Upper Level French and Lower Level French. Those classes were much larger, taking place in auditoriums that seated a couple hundred students. Because of the small size of the grammar classes, we got to know the other students there fairly well. I became friends with a Korean girl named Kyung Jin. Just a few months before, I had taken some Korean classes at a Korean church in my town. I used the little bit of Korean that I had learned to break the ice early on with Kyung Jin and it was well worth it.

Université Stendhal, my school for a semester

Kyung Jin invited me to lunch at her apartment one weekend, along with a Danish and a Norwegian girl from our class. I was excited to do something social outside of school. Trepidation began to set in, however, when I realized she lived far off my trusty tram route. I was going to have to expand my public transportation horizons. I was going to have to take the bus. Kyung Jin gave me the bus number and I picked up a route schedule on my way home from school. I studied it for quite awhile that evening until I was not completely terrified about venturing off my beaten path.

Kyung Jin and my host parents, Hélène and André

The next morning, I made it to the bus stop and onto the bus without incident. It was going to be a ride of about twenty minutes, so I settled in and stared out the window at this area of Grenoble that I had never seen. About halfway to Kyung Jin’s place, the bus pulled into a designated bus turn-out. People began filing off. It seemed like a lot of people. But I noticed that most of them seemed to be junior highers, so I just figured that there must be a school nearby (French schoolchildren all ride the public buses; there are rarely buses reserved just for shuttling kids to and from school. Something a lot of American communities could take into consideration…). But wow, it sure did seem quiet after that. I sat patiently in my seat in the middle of the bus, waiting to continue my journey. Huh. The driver turned off the engine. Strange. I was beginning to feel a little nervous as I watched the driver in the mirror at the front of the bus. He lit a cigarette; he turned slightly in his seat and put his feet up on the dashboard; and then he unwrapped a sandwich. The dimmer switch on my brain slowly brightened to a full glow and I realized, “He’s on break!”

Embarrassed and horrified, I gathered my things and hurried towards the front of the bus. The driver, thinking himself alone, nearly jumped out of his skin. He spun around and slammed his feet back to the floor, yelling, “Que faîtes-vous?! Vous ne savez pas?! — What are you doing?! Don’t you know?!” “Je sais maintenant! — I know now!” I called back as I sprung out of the bus and hurried across the street to where the rest of my fellow passengers were waiting for the bus that would complete the route. I can only imagine what was going through their minds as they saw me exit the bus a full five minutes after them.  Secret tryst with the bus driver or just an ignorant foreigner?

It's a big city, Grenoble

I did eventually make it to Kyung Jin’s apartment (not before I arrived in the general vicinity, couldn’t find it and had to call her from a beer-soaked payphone) and we all had a wonderful afternoon together. I learned interesting things like Korean chopsticks are shorter than Chinese chopsticks, Danes and Norwegians can understand each other speaking their own languages although they prefer to just use English.

And, if everyone gets off the bus, even if you don’t know why, you should, too.