Last year, I bought a book with cute clothes for kids, each with some kind of smocking. I’ve flipped through it several times, admiring the clothes, but had never really paid much attention to the instructions. I figured I’d read all that once I was ready to do some smocking. This past week I finally got around to it (have you noticed a theme here on my projects? It seems like that year buffer in between an interest in a new craft and the actual execution of it is my modus operandi).

Despite all the gorgeous projects included in the book, I had something else in mind. Both of my girls needed new summer nightgowns with certain criteria to fulfill:

Smocking seemed to fit the bill to give them that roominess that they wanted, with the added bonus of also being pretty. Awhile back, I had bought a twin-sized gingham sheet in an indeterminate shade of red. Or pink. Salmon? Originally, I was going to make a dress out of it for Rana , but for some reason she deemed it “too boyish.” I debated for a couple weeks whether to buy different fabric for their nightgowns or just use the sheet. In the end, frugality won out. Plus, 1/4 inch gingham is ideal for a smocking project and makes for a minimum of work for me (also a theme here. Apparently I’m a lazy procrastinator). See, for all of you uninitiated in the ways of smocking, the first step requires marking lines of dots onto the fabric. Lots of dots. Teeny tiny dots spaced 1/4 inch apart. They do make iron-on transfer paper with these little dots, but I don’t have any and I hear that stores still prefer money rather than wampum or beaver pelts or cake (running low on the first two, but I can bake a cake! Now I have an interesting image of me on the street corner with a sign, “Will bake for fabric.”) So you can see just how good this sheet was looking to me now, regardless of Rana’s opinion. In lieu of tiny dots, the corners of my gingham checks would serve the same purpose.

I settled down with my pretty book and realized after a few minutes that the authors make the assumption that anyone purchasing their book already has a rudimentary knowledge of smocking. Well… I didn’t. Internet to the rescue! I found this lady’s blog and she very helpfully detailed every step needed to get me started.

The first step is putting in the pleating threads.

For some reason, this took me a long time, as in, several days. It’s really not hard; I must have gotten interrupted a lot, which is not unusual with a 5, 3, and 1 year old. I’ve already completed this step on Granota’s nightgown and it only took me a couple of hours last night. Maybe I’m just that much better now.

Once all those threads are in, the next step is to pull them and make the fabric pleat up.

Not the desired effect

It was almost right! I was so close! Close enough not to realize – newbie that I am – that it really wasn’t close enough. I ignorantly carried on with the actual smocking. I used the book for this — one of the patterns seemed simple enough for me to do on this Inaugural Voyage into the Realm of Smocking. 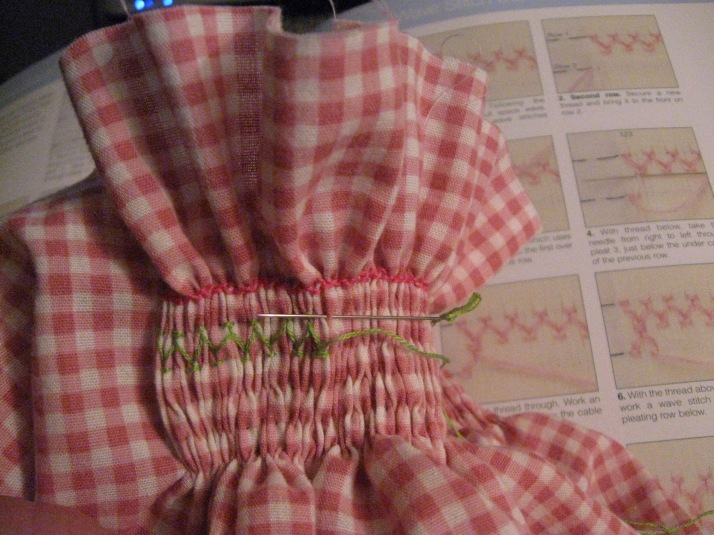 Looks pretty good so far, aside from the fact that the picture quality looks like it was taken twenty years ago. Grainy!

That top line of dark pink stitching is supposed to be the stabilizing line. You’ll see in a minute how well that worked out. It was at about this point in the green stitching that I realized how horrible my “pleating” was. I could never tell which bump to stitch in, so I just guessed. And you’ll see how well that one worked, too.

Once I got in all my decorative stitches, I cut loose the black pleating threads and instantly knew that we had a problem. Instead of staying nicely bunched up, the fabric exploded. Oh, did I mention that when you smock a garment, you have to cut the fabric three times the width of the finished piece? Without proper smocking holding it into place, this nightgown was going to be much, much roomier than any of us had expected. Rana and Granota could have worn it together!

Note the decided lack of pleats or bunching. My nice green zigzag stitches are all distorted and the dark pink may as well not have even been there for all the good it did. Rana tried it on and the front dipped down halfway to her belly. In a horrified stage whisper, she hissed at me, “People are gonna see my boobs!” I did some emergency smocking (with her still in it, much to her annoyance) to pull in some of the slack so that she could wear it to bed last night. We never did get it quite high enough, but we were both tired, so agreed that it was good enough for sleeping and sent her to bed. I think what I’m going to have to do is put in a permanent pleating thread on the inside to hold it all together.

This is what crafting fearlessly is all about! I wouldn’t call this a complete failure because, in the end, I did produce a wearable garment with interesting decoration, even if it wasn’t quite what it “should” have been. And besides that, I learned a lot just from the experience. As I mentioned above, I’ve put in the pleating threads on Granota’s nightgown, so I am going to take extra special care in making sure that the pleats turn out right this time. And once those are right, the rest of it should just follow! If not, then I guess we’ll get another installment of Things JenGren Learned While Attempting to Smock.