We’re going to rewind here a little bit, back to November/early December, pre-Christmas and even pre-baby, but post-move. Dang, moving is expensive. So, finding ourselves cinching the ol’ belt even tighter those months meant that we had to get creative with Christmas gifts. I scoured the internet for nice DIY projects that could make suitable gifts for the people on our lists (our families draw names). For the next few posts, we’ll look at what I came up with! The kids each had two gifts to make and I let them take the lead on the projects as much as possible so that the gifts were truly from them and not just a Jen project from start-to-finish. All three kids really enjoyed the creation process; Rana enthusiastically declared, “This is way better than just buying stuff!” I like that attitude.

Granota was the first to do her projects because it was easiest to get time alone with her without the other two clamoring for attention or wanting to “help.” The first thing Granota made was a cookie-mix-in-a-jar. This is great for her age group (she’s 6) because there is so much she can do herself with just a little guidance. Plus, playing in the kitchen is always exciting! The recipe we used called for Rice Krispies and M&Ms, neither of which we had on hand. Instead, we substituted cranberries and chocolate chips. Also, because we use cane sugar instead of white sugar, there is not a lot of color difference between that and the brown sugar. The beauty of these mixes in a jar is the different colored strata, so we divided the flour and put it between the sugars and then on top of the brown sugar to give the jar that nice striped effect. Granota did pretty well in the kitchen and had a blast measuring the ingredients and pouring them into the jar. I… did quite well biting my tongue when she dumped half a cup of flour on the counter and made other little 6 year old messes. That’s huge for me, people. 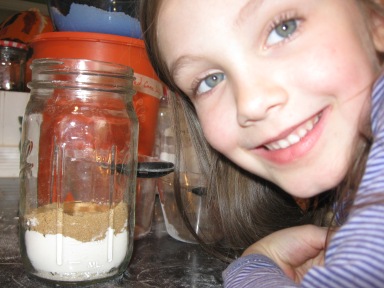 Then, to make the jar pretty, I let Granota choose from my stash of old Christmas cards that I save for crafty purposes. You just never know. She used the jar lid as a template, chose the picture she wanted and cut it out. For the instruction tag, she used the back of the card and chose a clipart tree that I printed out for her which she glued on to cover the brand name. It’s a little jaggedy and not “picture perfect,” but she was one proud little girl to have made this “all by herself.” And I was proud of myself for giving her the opportunity to shine. 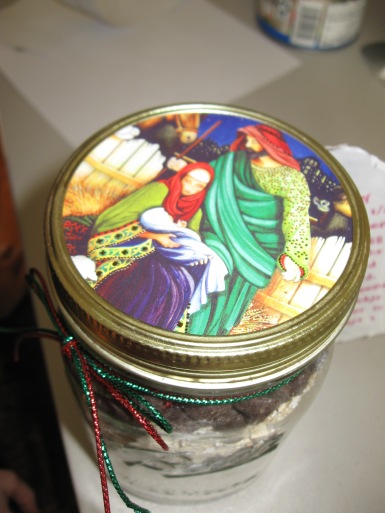 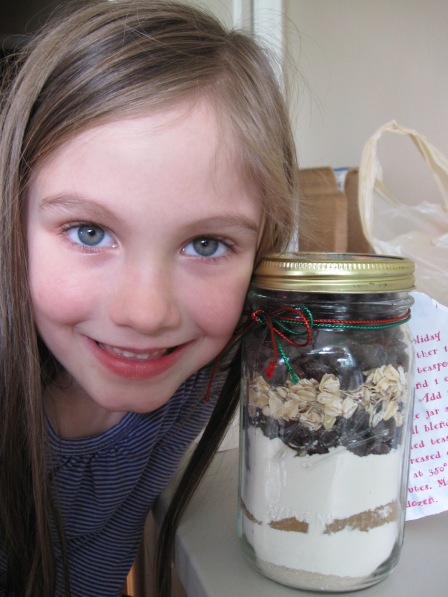