Far be it from me to ever lead you to believe that everything I make turns out awesome every time. It’s not “crafting fearlessly” if I’m too cowardly to discuss mistakes or shouldabins. So let’s go back and look at a few of the things I’ve made over the past year and see how they’ve worked out.

I made two of these last summer to cover Rana’s thumbs in an attempt to keep her from sucking them. First lesson learned: There is a reason why sinew (real or fake) is used to sew leather. The thread repeatedly wore through and I ended up having to repair these several times. The concept was good and actually worked up until the point where Rana “lost” the covers sometime this winter. I recently found one in the bushes outside. heh. And wouldn’t you know it, now it doesn’t fit her anymore. She’s a cagey one. 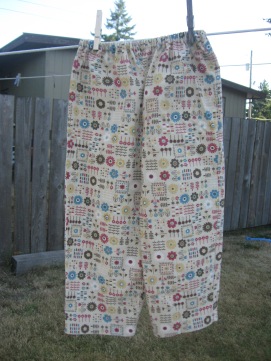 These pants were among the slew of clothes that I made for Rana at the beginning of the school year (that seems forever ago!). Something was never right about the crotch so they were uncomfortable for her to wear. Fortunately, there was a solution! I took out the crotch seam, whacked the pants off at the knees and made it into a skirt. It was a cute little skirt. Unfortunately, it cramped Rana’s playground style — too hard to climb stuff — so she never wore the skirt. I guess I should just give it to Granota. 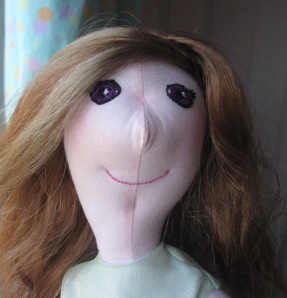 This fairy doll was Granota’s 4th birthday present back in September! She was not met with the excitement that I had anticipated, but after a couple of days Granota fell in love with her and named her Falilla. Falilla looks so pretty here; it’s almost a shame what she looks like now. Granota insisted that I put her hair in a ponytail so that it would be out of the way of her wings. Now Falilla is losing copious amounts of hair. I’m going to try to run a line of fabric glue along the underside of her roots to slow down the balding. It’s a good thing I gave her so much hair to start with. Interestingly enough, Jessie the cowgirl doll that I made for Rana has not had any hair-loss issues. Maybe Falilla needs a fairy hat. 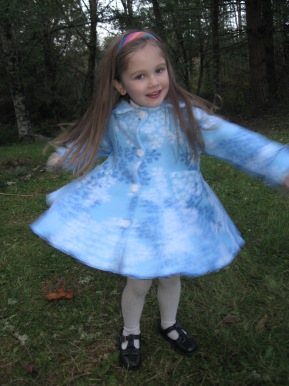 In November, I made each of the girls a new winter coat. These coats, as you can see, are very full. Wonderful for twirling, not wonderful for buckling into car seats. The other problem is that I did not make the center front pieces wide enough — they just barely overlap enough to button. That means it is highly likely that these coats won’t fit the girls next year. In a way, that’s ok, because I am pretty sick of struggling to get everything flattened and mashed down enough to get them buckled into the car. If we lived in Europe and walked or took public everywhere, these coats would be fantastic, but as it is, I’m going to have to use a different pattern this fall. 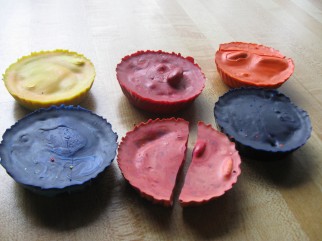 Not all they’re cracked up to be

March brought my attempt at recycling all the broken crayon bits in my kids’ coloring box. I melted them down in muffin cups and right off the bat I could tell these weren’t going to be as awesome as I had hoped. As you can see, they were already beginning to break after they had cooled. I’m pretty sure that there is not one left whole anymore, which pretty much defeated the whole purpose of melting the little bits together.

Most recently are the new pajama pants I made. I had this ingenious idea to elasticate the cuffs. Y’know, to keep them from riding up and twisting around my knees at night. Well guess what? I didn’t make the pant legs long enough, so once I bent my knees, the cuff rode up and then got stuck right around my calves. Thanks, elastic. The other night it was driving me so nuts, I seriously considered going downstairs and taking it out right then and there at 2 a.m. But since the cabin is basically one giant room, I knew Mr. Gren wouldn’t appreciate me turning on the light; so I just toughed it out the rest of the night. But the elastic is out now! Hopefully it will feel better tonight. I think it was still a good idea, but next time I’ll know to add some extra length in the pant legs.

So there you have it. A little rundown of some of my not-so-perfect projects. It’s all a learning process, isn’t it?

Ever since Rana was 1 year old, I have made coats for my kids. I meant to make new coats for the girls last year. Bought the fabric, even cut out the pieces for Granota’s coat and then… I don’t know what happened, but the coats never got made. And now the cut pieces are for a size smaller than Granota currently wears, so I couldn’t even use those. Rana and I bought new fleece right before our big move and I packed it into a bin to work on once we got things set up at the cabin. When Rana started at her new school, it dawned on me that the coat she has been wearing was the one I made her when she was 3. She’s 6 now. A new coat was definitely a necessity. In two days, I got it done and she was thrilled to death.

I used Simplicity 2745. I make the coats with two layers of fleece (so basically, I make two coats and sew them together) for extra warmth.

A look at my sewing area while I sew on buttons

Hurray for being warm!

Nice and full makes it good for twirling