WordPress tried to get fancy on me and switched me over to the “improved posting experience.” Well… the improved experience ate my post last Wednesday and I was too disgusted to start over again. But, I suppose it’s time to stop pouting and get back on the horse. Problem is, I don’t even remember what I was going to write about. How about we take a look at our Halloween costumes?

There wasn’t a whole lot of crafting involved in our costumes, but there was a considerable amount of DIY.

First is Rana. She wanted to be Cleopatra, which is actually what she had intended to be last year before Joan Jett swayed her. The Joan Jett wig was hardly suitable for Cleopatra, so I looked and looked and the best I could find was a Snow White wig. Rana doesn’t know that I cut the red ribbon off. This wig had seen better days and I tried to tame it by soaking it in water and conditioner, but that really didn’t do a thing. To make it look appropriately royal and Egyptian, we needed some kind of headdress. I didn’t really have time to make something elaborate; I found this crochet headband pattern which turns out looking pretty good in gold crochet thread. The beauty of this pattern is that you can make it up in any weight yarn (well, within reason), just use the appropriate sized hook. One thing to note is that this was written with UK crochet terms, so for Americans — when she says “slip stitch,” she means single crochet. It will turn out to be kind of a lumpy mess if you actually slip stitch.

Rana’s Egyptian “dress” is actually a chemise I made from Simplicity 5726 (The Fashion Historian pattern by Martha McCain) which I’ve already talked about here . A gold and silver belt and some canning rings for bracelets finish off the costume. Rana was convinced that she was the spitting image of Cleopatra and we’ll just let her think that because she had fun, and isn’t that what dressing up is all about?

Granota was a kitty cat. With purchased ears and tail, a painted face, and black clothes, her outfit was pretty easy to put together. 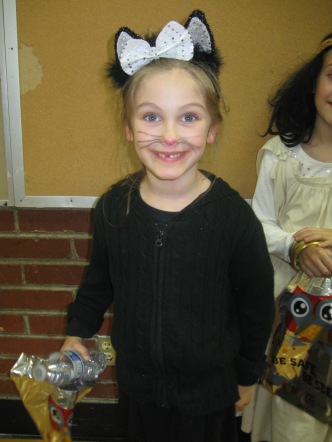 Beaten only by… Konik’s pumpkin suit. I crocheted the little stem & berries hat he is wearing, but apparently never blogged about it? I can’t find a post about it. I made it when he was just 1 year old and so now, it is technically Sprinkaan’s hat, but Sprinkaan is a kind and understanding baby and let his big brother borrow it for just one night.

So that leaves Mr. Gren, Sprinkaan, and me. Can you guess?

Yes, we were Doc, Marty, and Jennifer from “Back to the Future.” We outfitted Baby McFly’s stroller like a little cardboard Delorean, complete with glow-stick flux capacitor. It all started because Sprinkaan already had that little red vest and we went from there. If we had had more time between when we thought of the costumes and when we wore the costumes, we probably could have made a better Delorean. But that’s what you get for one rushed afternoon of work. Also, there was that little issue of making it baby-safe. Rather than being an exact replica, we’ll just say it embodies the essence of the real Delorean. 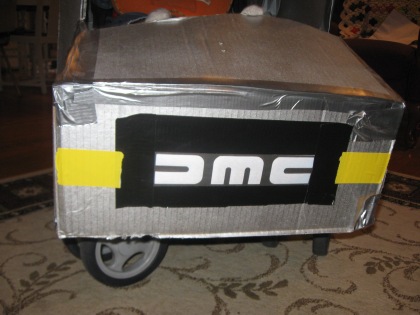 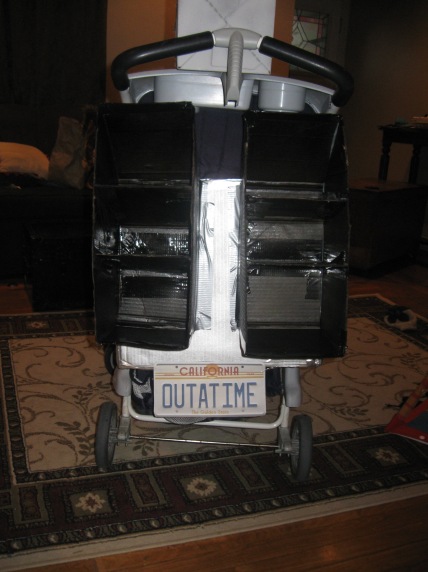 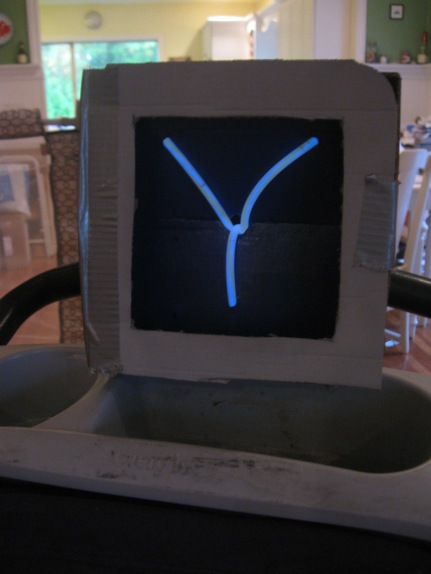 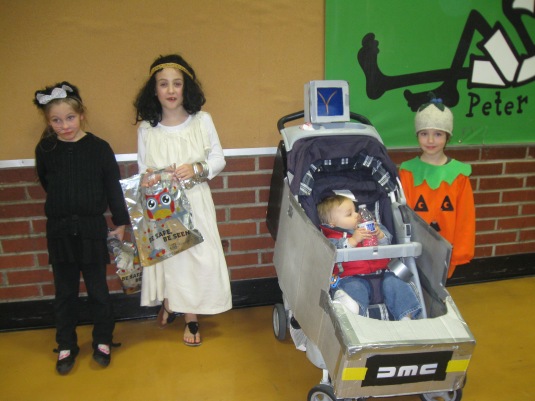 In case you missed it, yesterday was Halloween. We aren’t big Halloween celebrators, but we like to carve pumpkins and wear costumes (if you are a big Halloween celebrator, then you’ll love the display my friend Elle put up in her yard, and even if you’re not, you should check it out anyways ’cause it rocks). The kids started asking for pumpkins on the 1st of October and apparently, Mr. Gren and I just got into refusal mode (thinking we’d do it closer to time), until the 30th when once again Rana asked, “Aren’t we going to do pumpkins this year?” Word to the wise: don’t go shopping for jack-o-lantern pumpkins the day before Halloween. If you find any, they’ll all have the stems knocked off, gouges in the sides from being on the bottom of the heap for a month, and/or in various stages of rot. We ended up having to buy pie pumpkins. I told Rana I could cook them after they were done being jack-o-lanterns, but she was horrified at the thought and made me promise that I wouldn’t do such a heinous thing.

We usually have the kids draw a face on a piece of paper which Mr. Gren and I then copy onto the pumpkin in Sharpie. They each drew a face and then decided that their pumpkin faces looked too similar to last years’. Somewhere in the discussion, we branched way out from regular jack-o-lantern faces with triangle eyes and toothy grins to Hello Kitty, Curious George, and Princess Peach. Looking at pictures of the three characters, I freehand drew them onto the pumpkins and then Mr. Gren and I commenced carving. I don’t trust any of my kids with table knives much less anything with a point!

Ah, but don’t think that the kids got out of all the work. They had to empty the pumpkins first. I’d much rather do the carving! 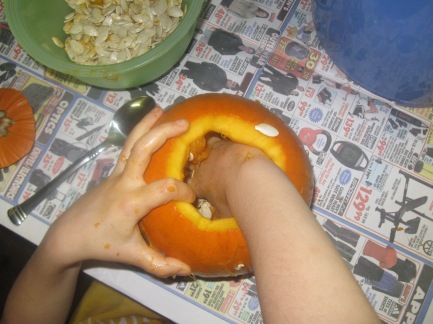 As for costumes, I didn’t sew or create anything as in years past. Granota wanted to be a princess and we found a lovely princess dress for her at the thrift store. The crown I did make… several years ago. It used to have jewels, but restless fingers picked them all off sometime last year. 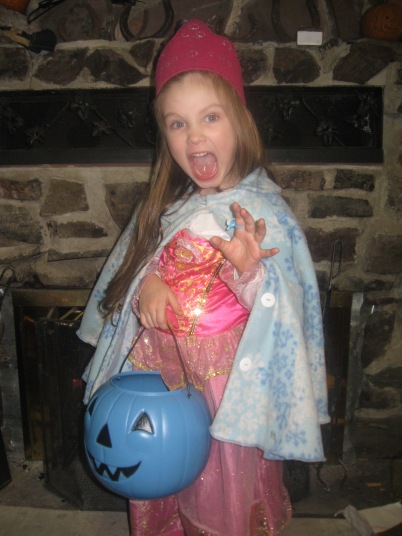 Konik is not too thrilled with this whole costume concept. So we tricked him. He loves his rainboots and raincoat and he always likes to have a hat on when he goes out… 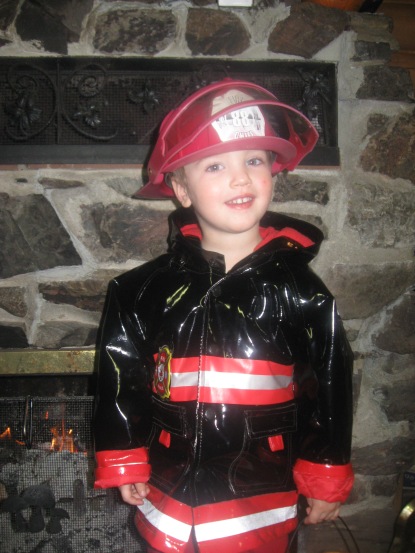 Rana originally wanted to be Cleopatra. At the thrift store, we weren’t finding any plain white garments that could easily be adapted into an Egyptian style dress. But then the sleeve of a gold and black floral printed blouse caught Rana’s eye. “This looks like a rock star!” she exclaimed. In reality it looked like an old lady dressing up for a dinner party. But it was the catalyst. The lightbulb came on and Rana declared, “I want to be a rock star! I wanna be Joan Jett!” Shopping for actual clothing is so much easier. We wheeled down to the kids’ section and look what we found:

They got to show off their costumes at a local church’s Trunk or Treat, came home and collapsed into bed. Perfect! 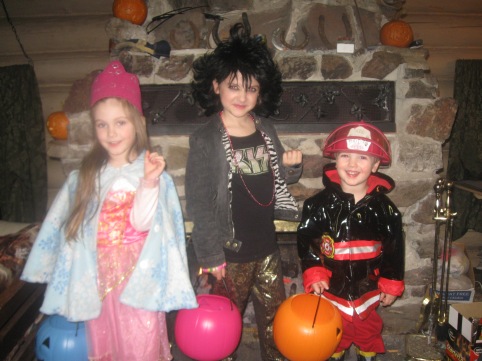