Earlier this year, I mentioned having a couple of “commission” projects that I needed to get done before I could truly start on any of my own things. The first was making a Roman shade for a friend out of some sunflower fabric she had been hanging onto for years. It was my first go at making a window dressing more complicated than a rod pocket or tab-top curtain. I spent a lot of time reading tutorials and pondering the logistics of it. So that was January. When I finished up the shade (which I did not photograph, sorry), I immediately began working on an afghan for a friend whose canine companion of 14 years had just died right around Christmas. This wasn’t so much a commission as an idea for which I managed to convince some other friends to help fund me (not that they took much convincing — we were all heartbroken for our sweet friend, S, and wanted to do something to help lift her spirits). I presented my idea to them and the photograph I would use to make the afghan — a picture of S’s dog wearing a birthday party hat that she had posted on Facebook a few years ago. What a fun way to remember her little dog! I worked on this afghan everyday and felt like I couldn’t (shouldn’t) work on anything personal until it was done because I had a whole bunch of people counting on me, plus, I just wanted to get it to S as soon as possible.

I used a J Tunisian/afghan hook and Caron Simply Soft yarn; I like it for the sheen and the softness. Here are some “work in progress” pictures with the grand finale at the end. 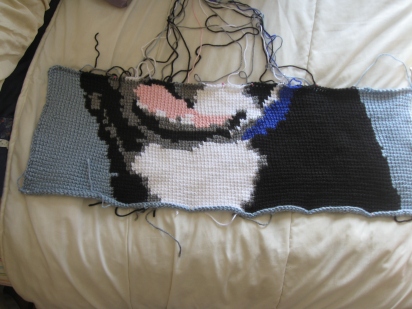 A little weird and abstract at the beginning

Now it looks like a dog! 2/3 of the way done with the picture.

All done and with a border on it!

I finished it late one night at the beginning of April and mailed it off the very next day. One of the other ladies contacted S’s husband to let him know that “a package” was coming and when it was to arrive so that he could grab it off the porch before S got home from work. He had agreed to video her opening it and then, with her permission, post it for all of us to see since we’re scattered all over the country. S had no idea that we had been doing any of this, so it was all a huge surprise. She was speechless! But she and her family loved the blanket and that totally made my day. I’m so glad I was able to make something so special for her.

Since then, I’ve been working like a maniac in the garden. Or rather, I made gardens out of overgrown patches of land along our driveway and cleared out another overgrown flower bed. I’ve just about got everything planted and I’m really feeling the itch to sew again, so there should be more consistency (I say. ha ha ha) coming up!

It’s big! It’s green! It’s mean! Ok, it’s pretty much the opposite of mean. It’s soft and fluffy and warm. And it is the secret project I alluded to last week! My friend, Mrs. G, needed an afghan in her life. She was having a lousy day awhile back. Her cat had puked and made a mess and it was a cold, dreary day to boot. Mrs. G lives on the other side of the country from me, so I couldn’t do anything all that tangible or practical on that particular day, but I was struck with the idea that a comfy afghan could alleviate one of the problems. 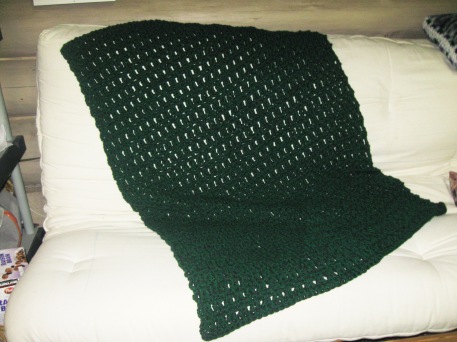 I had a pattern in mind that pictured an afghan made using two strands of yarn together in two slightly different shades of burgundy. The result was a sort of trompe l’oeil shimmery effect as the colors played off each other. I purchased two skeins of Caron One Pound, one in forest green and one in Kelly green because Mrs. G’s favorite color is green (as is mine!). For reasons that I now cannot remember, that original pattern wasn’t working out so well. So I switched over to my Vanna White crochet book and found an afghan she had done in bulky yarn. Two strands of worsted weight makes a pretty good equivalent to bulky weight! The two strands of yarn together make this afghan super squishy.

One of the most fun (funnest?)  things about crocheting this afghan was the chance to use my ridiculously huge Q hook. I originally bought it as a toy for Rana when she was about 2. She always wanted to play with my crochet hooks but I was afraid that 1) she’d lose them or 2) she’d skewer herself with one of them. No worry of that with the Q hook. Well, she did lose it and I ended up buying another one, but then we found the first hook, so now we each have one. 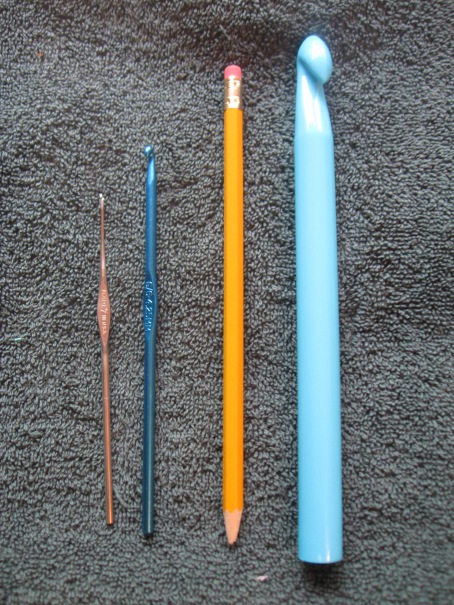 It was fun, but really different to use. For one thing, I had just come off crocheting the lace for my peasant top, so the change in hook size was drastic. Also, since it’s plastic, it doesn’t glide through the yarn as smoothly, which fatigued my hands a little bit. Still, that can’t compare with the way I was able to race through this afghan. If you’ve read much of anything on my blog, you’ll know that, while I do enjoy the creation process, I enjoy the finished product as much or more.

I also really enjoy making things for people and it’s especially fun if it’s a surprise! I stuffed it into one of those medium sized flat-rate postal boxes and Mr. Gren mailed it off for me last weekend. I had to send it to Mrs. G’s parents’ since her apartment mail delivery is a bit dodgy. Ack, the suspense was killing me! But on Sunday, she let me know that she had received it. And she loves it! Mission accomplished! (And, Mrs. G: If the cat pukes on the afghan, machine wash cold, dry low heat. 🙂 ) 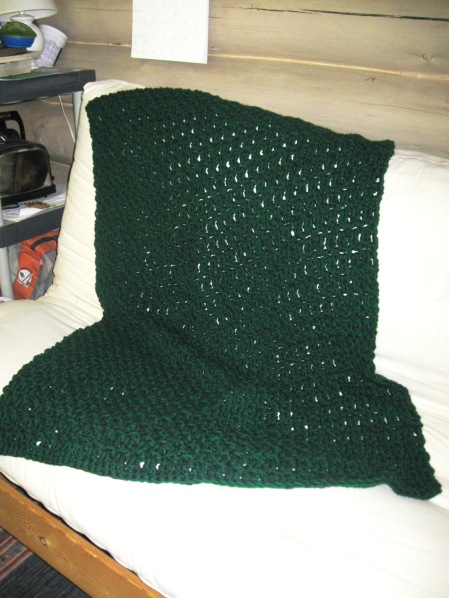