My sewing machine has been gone since Saturday and I still feel lost without it. Adrift on a sea of unsewn fabric, hearing the whispers of patterns pleading, “Make me! Make me!”

Ok, it’s not that dramatic. I have been keeping myself occupied. Both of my girls need new summer nightgowns, especially Rana. I’ve wanted to learn to smock for a long time, so I found this to be a good opportunity. The girls like to pull their knees up under their gowns, so I’m hoping that the smocking will give it the extra fullness it needs to accommodate little girl legs. I’ll write more about this once I’ve completed one. Right now, it’s not too exciting.

Today was “Make-it Monday” in our house. Each Monday during the summer, I try to have a craft planned for the girls to do to keep them out of trouble. It works for a few minutes. Today’s project was pseudo-sun catchers. The old 1960s craft book I have suggested using tissue paper as the base, but that seemed too fragile to me. We used wax paper instead, and then glued little bits of colored tissue paper, sparkly ribbon and glitter all over it. I drew simple shapes on the girls’ paper and they filled in with all their decorations. At first, Rana requested a unicorn, but I talked her down to something a little less fiddly — we went with a bunny silhouette. Granota made it easy on me and just asked for a flower. The project went… ok. While I was fighting with Granota’s glue bottle cap to get the gunk out of it, Rana opened up her glue and dumped it out all over the table. Thank goodness for the layer of newspaper I had put down. I didn’t take pictures of the process or the finished products because Granota was feigning helplessness and I wasn’t sure I could trust Rana long enough to go get the camera. Suffice it to say that the girls are very proud of their masterpieces which are now taped to their bedroom windows.

And now, so this post won’t be completely devoid of photos, I’ll show you the finished patchwork pillowcase dress, happily modeled by Granota. Just to review, this was made from two thrift store pillowcases + some bias tape I already had + one button from the button jar = $2.

Despite the print, the bodice seemed plain, so I pinned a silk flower to it. Removable for washing. Thinking ahead right there, uh huh. The Minnie Mouse ears are not removable. She evens sleeps with them. Usually we can convince her not to wear them to church. 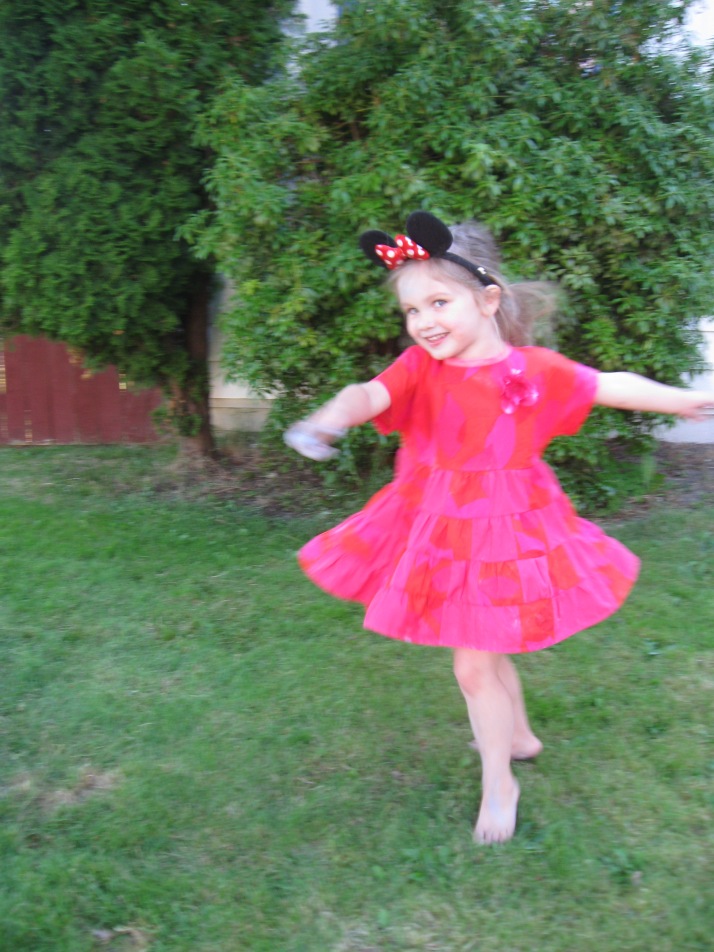 And next, a grown-up dress. I think I finished this one late April/early May. I wore it for Mother’s Day, then hung it up and forgot about it until last week. I was attempting to go a little out of my comfort zone with the big print on this. Stuck with my favorite colors, though. It was also the first time I sewed with rayon. I’m pretty happy with the fit, but for some reason, if I’m not wearing shoes, this dress suddenly looks like a nightgown to me. Guess that will prevent me from going out barefoot in public . 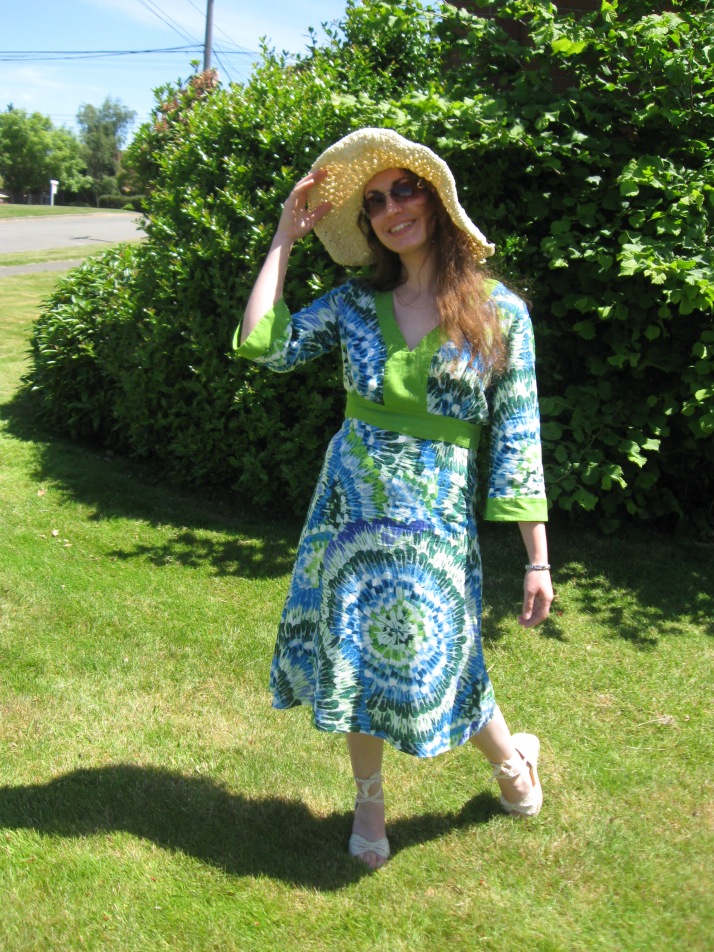 Little bit of a hippie vibe

I'm not wearing tights; my skin is just that fabulously pale all on its own.

Thanks for checking in today! Hopefully Wednesday will be more interesting!