Yeah, yeah, yeah. I still haven’t made anything. I’ve been doing some more drawing, practicing my crayon skills. I’ll post on that another time. But for today, an actual finished project completed by Granota!

The other day, she came to me asking to “sew little squares.” A quick rummage through my scrap fabric yielded a nice assortment for 6 little squares. Ok, techinically they’re rectangles. She can’t thread a needle by herself yet and she needs me to anchor the first two stitches, but after that, she’s good to go. She spent all yesterday afternoon happily sewing away while watching Curious George.

First, she sewed the squares in pairs, then she laid out her little strips in an arrangement that she found pleasing. She’s a diligent little worker. Her stitching is a little large and uneven, but I was really impressed at how much she has improved since last spring — and she hasn’t even had any practice! I guess an extra year gave her a steadier hand and more disciplined approach.

With all of her colored squares together, she heaved a sigh and said, “This isn’t turning out how I expected.” I realized she had been looking at the wrong side all this time, not understanding that it was the other side that would show. I flattened out her little quilt and showed her the right side and she was much more pleased. Then I cut out a large rectangle of white for backing and explained how she was going to sew around, but leave a hole at the end so we could turn it right side out. She followed instructions well and thought it was funny when it came time to reach her little arm inside and pull it all out through the hole. A little pressing, a little whipstitch over the opening and she’s now the proud owner of a tiny quilt for her stuffed animals. 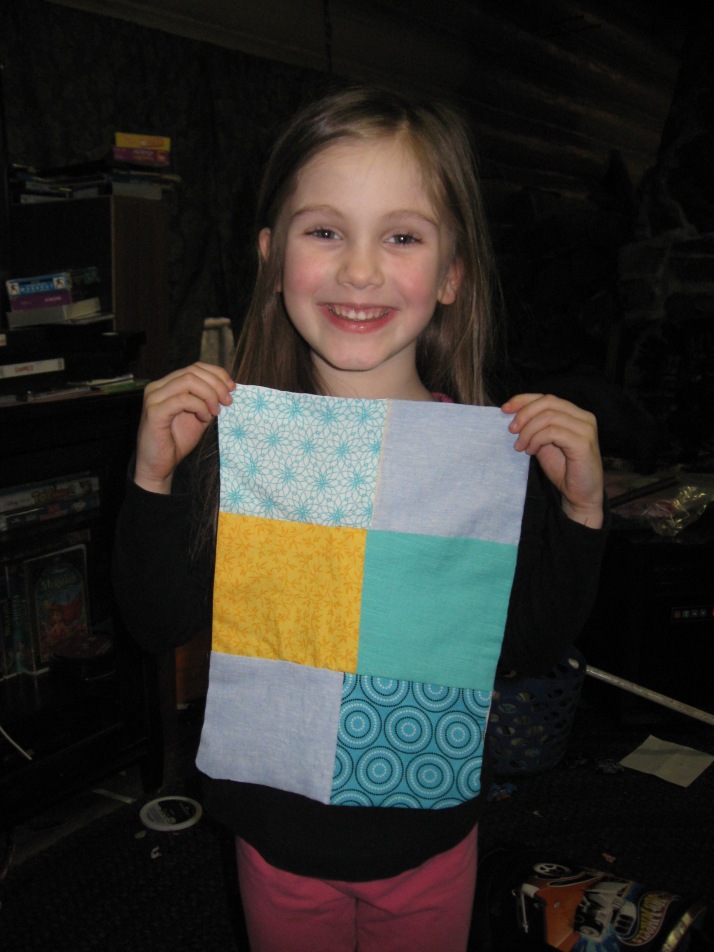 And I’m very proud of her! She had such a good time doing it, that today she has been working on a new little blanket for Rana. What a sweetie.

I mentioned that both of my girls were productive — I’ve been helping Rana sew up a little dress for her favorite stuffed bunny. Rather than do it all myself, I’ve been teaching her how to read a pattern, lay out the fabric, cut it, etc. I know she won’t retain all of that information this first time around, but I wanted to at least plant the seed! I’ll post her little dress when we’re done.