It was brought to my attention recently by a sweet little girl that she did not have a suitable scarf to wear. And it was true. The scarf — if it could even be called such — was my very first knitting loom project using the remainder of some yarn I had around. It wasn’t very long and, if you can imagine such a thing to be possible, she outgrew it. Once Granota spoke up about her lack of scarf, naturally Rana had to put in her plug for a new scarf, too. Her scarf is plenty long, but I made it out of Fun Fur (don’t judge me) years ago and, while it is, indeed, fun, it is not warm. We were at Michael’s the other day, so I let the girls choose their yarn color. Although I tried to steer them towards nicer yarns, the lure of variegated Red Heart was too much for them. Rana chose “Bikini” (appropriate for a scarf. Or not.) and Granota chose “Bonbon.” Konik was adamant that he did not want a scarf. He was perturbed that I would be working on other projects besides his socks. He wants socks and he wants socks now. Sorry, tiny dude.

The pattern I used came from this little Leisure Arts booklet that my mom gave me years ago when I grew up and left home. 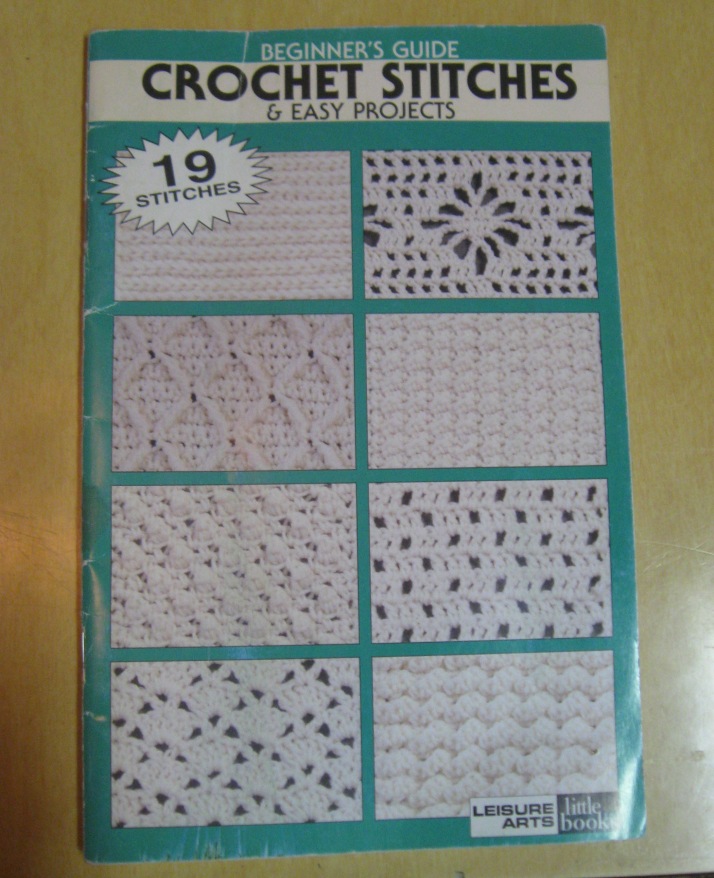 So far I’ve only used it for the different stitches, but in the back of my mind, I always wanted to try this scarf pattern that was in the back. It has a slit in one end to pass the other end of the scarf through. My kids can never keep a scarf on, so I thought this seemed like a good, simple solution to that problem. 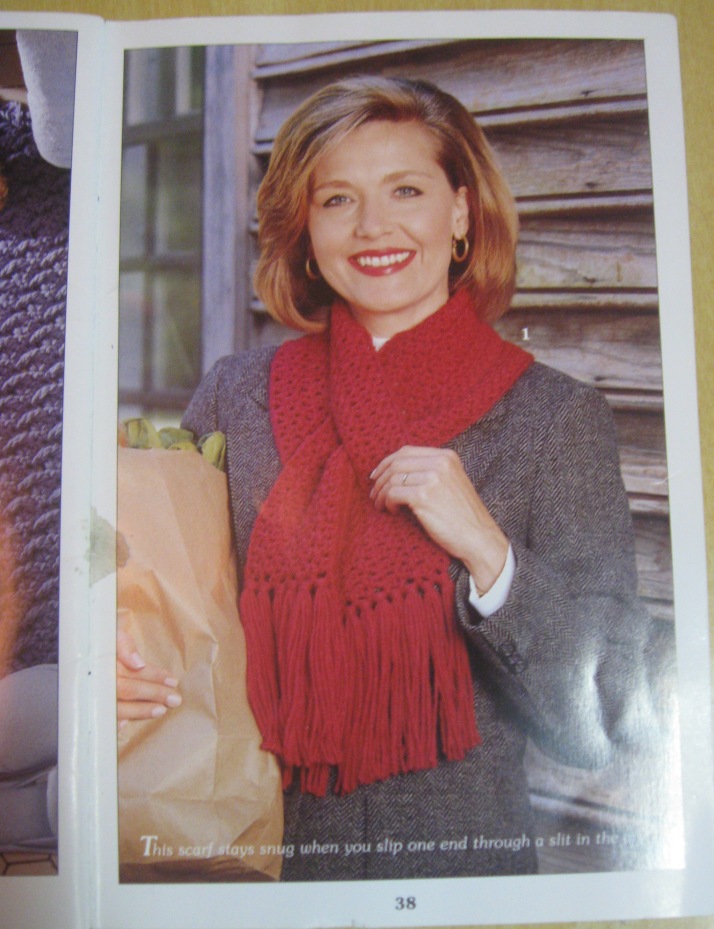 I don’t match my lipstick to my scarf, mostly because it’s orange and purple.

The pattern uses a cluster stitch. For some reason, mine was not coming out right. I was skipping a chain or something, because the whole thing kept curling up. So I scrapped that plan and made the whole thing in block stitch. Another time, I probably would have figured out the cluster stitch, but it was cold and the girls were chomping at the bit to wear their scarves.

If you have ever worked with Red Heart Super Saver yarn before, you know how coarse and scratchy it feels. Not exactly apparel-quality yarn. I discovered, though, while I was making the Axl dolls, that steaming acrylic yarn softens it up nicely (I steamed his hair). Just don’t touch your iron to the yarn unless you want to ruin them both. 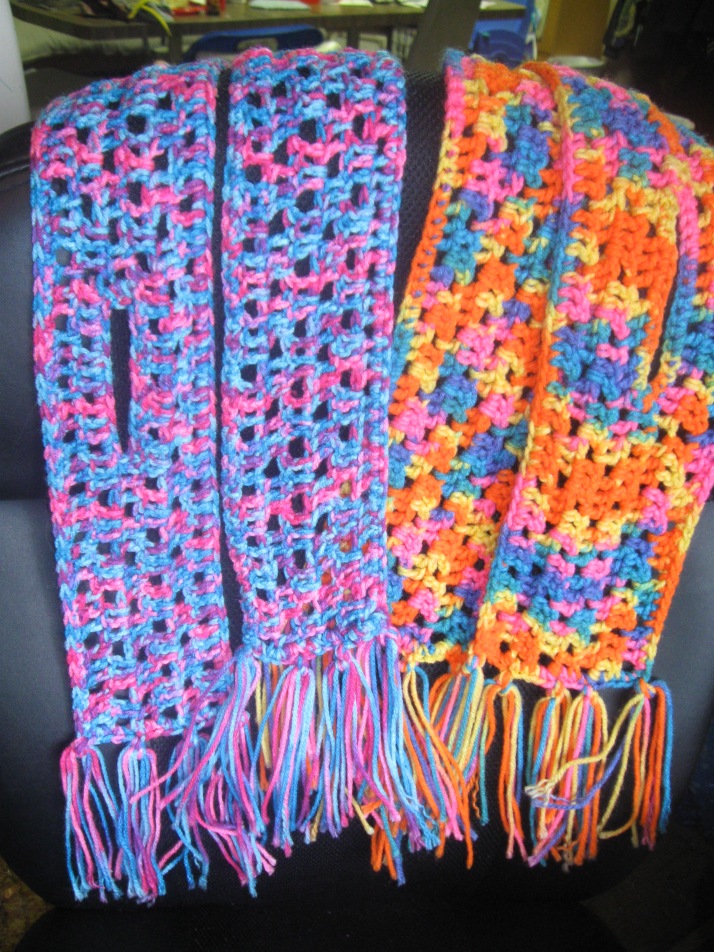 Bonbon and Bikini. Small girls were not available for modeling at this time. 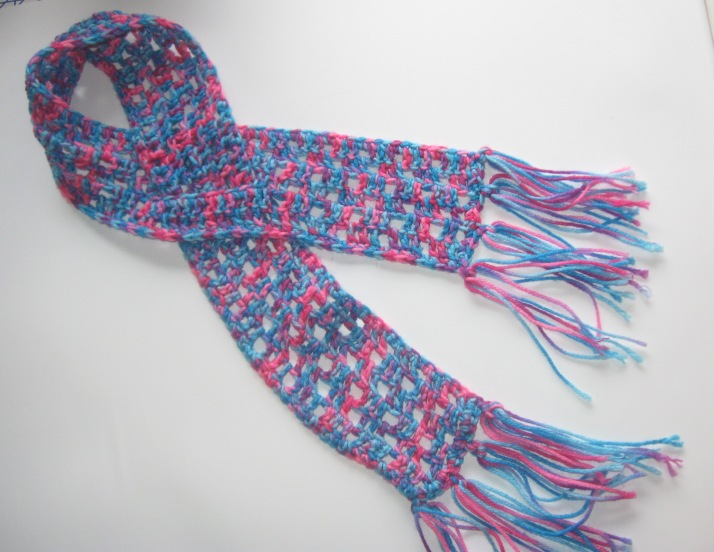 Tucked through the slit.

Granota says, “My scarf is super-duper, suuuuper duper warm.”
Rana says, “Mine is so nice to stay on.”

So there you have it. Warm and nice to stay on. Mission accomplished, wouldn’t you say?

Also, if you are interested in “scarfing it up,” there actually is an organization called Scarf It Up that collects scarves for needy individuals. I haven’t participated in it before; I actually just found it this afternoon. You can find more information about it here: Scarf It Up For Those In Need.