It is a well-known fact that there is exactly one week between Palm Sunday and Easter. It happens every year. Palm Sunday. Monday, Tuesday, Wednesday, Thursday, Friday, Saturday, Easter. I know this in my head. The crafty portion of my brain is, however, disconnected from logic and basic chronological concepts (maybe this is why I couldn’t tell time until junior high? Even now, my grasp is tenuous at best). Last week — Palm Sunday — I thought, “I should make the girls Easter dresses! I’ll choose a simple pattern; it won’t be too hard. I can sew two dresses in a week.”

What a week it was.

Monday: After dropping the girls at school, the boys and I hit the fabric store. Sprinkaan slept, and Konik was engaged up until I changed my mind about the two bolts of fabric I had been carting around with us. Then I split my time between choosing new fabric that I liked better and playing hide-and-seek with the boy who had had his fill of fabric. “I wish you would have just left me in the car!”

Monday is my laundry day, so I got the fabric washed and dried while I traced off the pattern pieces for Granota and cut out the larger size for Rana. All in all, a pretty productive day. 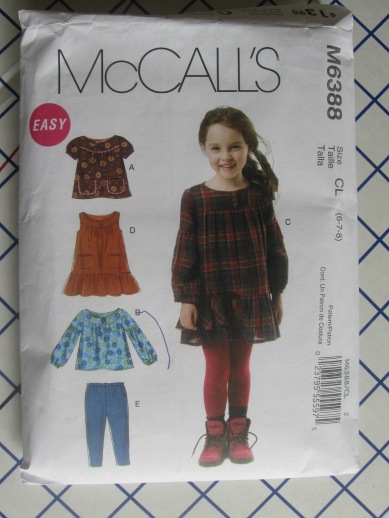 The pattern I chose

Tuesday: This was to be my big sewing day after taking the girls to school. Right out of the gate, Tuesday did not go as planned. I had all the kids ready to go, piling out the back door as I pushed the garage door opener. When I came out, I found the kids standing in front of the open garage door with confused and helpless expressions. 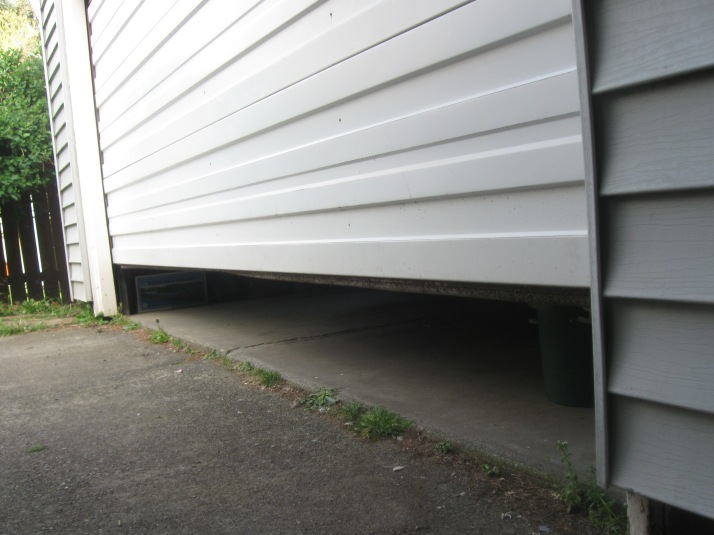 Houston, we have a problem

It was jammed and I couldn’t get it open more than about a foot and a half. Looks like we’re walking to school today, kids! Except that, I had allotted enough time for driving to school, not walking, so we were definitely going to be late. Also, Granota had a field trip first thing that morning. I ran inside to call the school and was surprised to be greeted so enthusiastically by the school secretary until, as I regaled her with the trials and tribulations that had beset us, she paused and then informed me that I had called the girls’ old school. We laughed and I assured her that we would not be walking the 20 miles to that school. I called the current school, told my story again and this secretary told me that the buses for the field trip would leave at 9:00, could we make it? “I think so!”

Before we could leave, I had to get the stroller which… was in the car which was stuck in the garage. So I performed a little Indiana Jones homage, belly crawling under the garage door to get it out. Then four kids and I hustled our hind ends to that school! We arrived just as the kindergartners were lining up outside for their field trip. Whew! I gave Konik a piggyback part of the way home while I pushed the stroller (and later perched him on the handlebar). By the time we got home, we were both beat and sewing was the last thing on my mind. Whether it was from that unplanned jog to school or what, Konik got sick later that afternoon, throwing up everywhere. No sewing that day.

Wednesday: I still didn’t trust Konik’s belly, so I was keeping a close eye on him; Rana woke up with a fever, so I decided to keep her home from school. But when I went to take Granota, once again, the garage door got stuck despite Mr. Gren having fixed it the night before. I told her that she would just have to stay home, too, that day. The difference between Tuesday and Wednesday: Tuesday was warm and sunny; Wednesday was rainy with two sick kids. The two sick kids perked up by lunchtime, but it was still raining, so they were all stuck inside. No sewing that day, either.

Thursday: We got smart and parked the car outside the night before so there would be no issues getting children to school. I got about a third of the way through Granota’s dress. It occurred to me that I haven’t really sewn anything in months. I felt rusty and slow.

Friday: Panic was beginning to set in. I had to get these dresses done. I finished Granota’s and, miraculously, things were moving a bit faster with Rana’s. When Mr. Gren left for work that night, he asked me how late I was going to stay up sewing. “Until I start making mistakes,” I replied. One thing that I figured was pretty mistake-proof was putting in the gathering stitches, so I took every piece that needed gathering and did that. By the time I went to bed, all the individual pieces were ready to be put together.

Saturday: Whether it was having made the pattern once already or just another Easter miracle, I was able to finish up Rana’s dress in just two more hours. I sewed the buttons on both dresses right before I went to bed. Down to the wire! I still excel under pressure, Mom.

In the tradition of family Easter photos the world over, Rana hams it up, Granota looks stiff and unnatural and Konik wonders what’s going on.

The fabric for Rana’s dress was called “rose sorbet” and Granota’s was “spring medley.” Cheery, no? It’s hard to see, but there are little rick-rack-bordered patch pockets on the dresses. (I did not make Konik’s suit — it’s on loan from my dear friend, V. Thanks!) 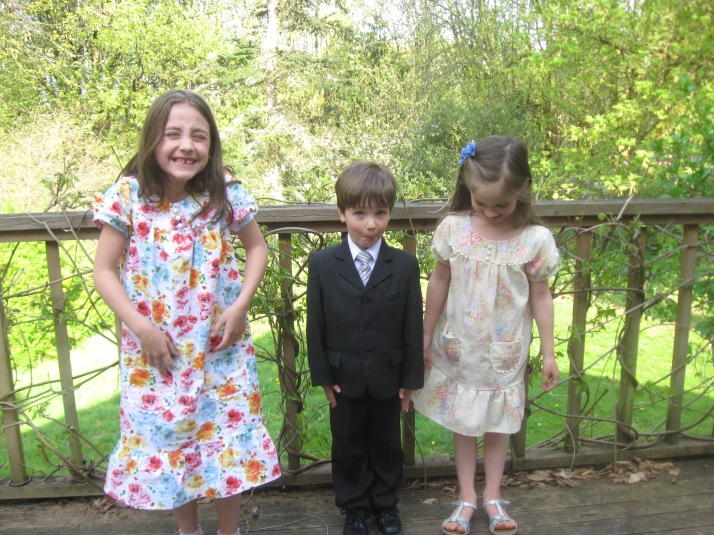 I did make the suit that Sprinkaan is wearing; Konik wore it for his first Easter! It’s a little blue and white seersucker overall and jacket.

And a close-up of the baby, because he’s adorable and photogenic and actually smiles for his pictures.

What I learned last week is that I can, in fact, sew two little Easter dresses in six days, however, it’s not really enjoyable and I could benefit from a little planning ahead. Easter 2015 is April 5th (you’re welcome), so I ought to start March 5th, to accommodate sick children, garage door mishaps and whatever else might come my way. I might even have time to sew something new for myself! (Hush, Jennifer, that’s just crazy talk)

Sometimes a person needs new jammies. The ratty t-shirts and faded flannel pants are a pretty sad combination anymore. Coming into warmer weather, I thought a nightgown sounded comfy. So I made one today.

I had a couple yards of ivory cotton sateen that I had originally bought to make a dress for one of the girls before I came to my senses about dressing them in white. It was just enough to make what I had in mind. I was aggravated, though, at the lousy cutting job the person at Joann’s had done. I had to cut off four inches on either side just to straighten it out. Does anyone else wonder if Joann’s fabric cutters have ever actually sewn anything in their lives? Most of the time, I just want to crawl across the counter and demand their scissors so I can do it myself.

Were they blindfolded when they cut this?

On the same pattern that I used for my flannel pajama pants, there is also a pattern for a bias-cut nightgown with spaghetti straps. I’m not a big fan of spaghetti straps while I’m sleeping. But I had something else that I thought would work and could be fun.

This is a historical pattern based on undergarments from the Civil War era. The chemise would have served as a slip by day and a nightgown by night. It doesn’t quite cover the shoulders, but if that ends up being a problem, I’ll just tack it a little further up. The pattern only uses four pieces — front/back, sleeves, front band and back band. It’s not a difficult garment to make. I did find it interesting that, with the exception of the bands around the neckline, all other seams were flat felled. But it makes sense that in the 1860s with no sergers and the like, a smooth finish like this would give strength and a clean finish to clothing, not to mention comfort, especially in the case of the chemise. For some reason, I always thought flat felled seams were some kind of difficult, mythical thing. Turns out, they really aren’t difficult at all, they just take a little extra care. 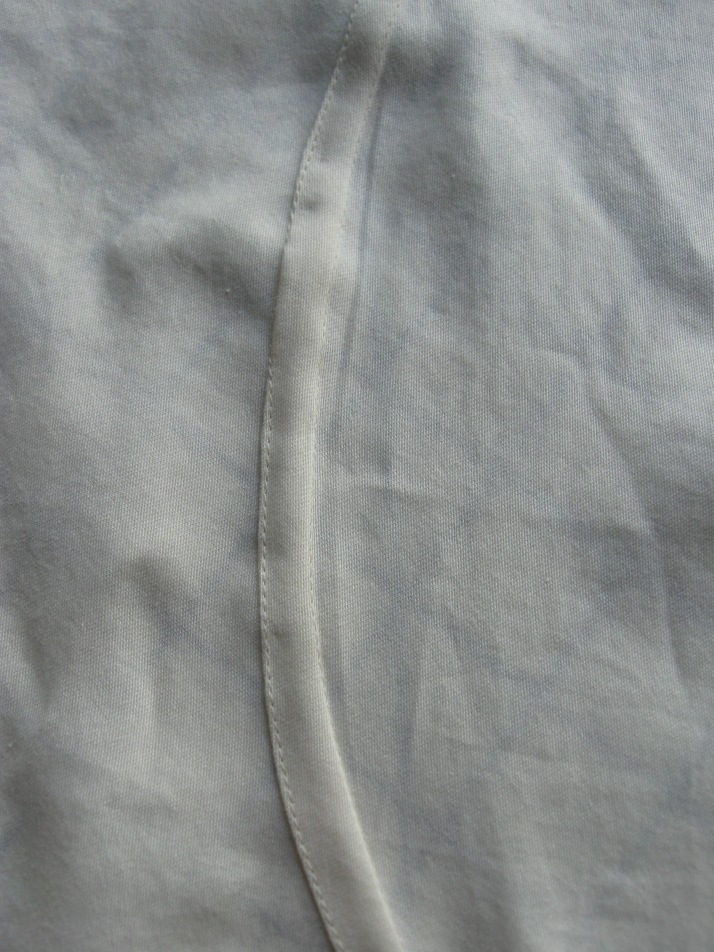 I was surprised at how loose the chemise is considering that it would have gone under a corset as shown in the picture. Wouldn’t all those extra folds of fabric have felt lumpy and uncomfortable underneath something as tight-fitting as a corset?

I bought this for the corset pattern — which I have made for a Halloween costume, just not with boning. Someday I’ll make a real one.

I didn’t have enough lace of any sort to trim around the upper edges as the pattern called for, so my night gown is as plain as plain can be right now. I briefly considered making a trip out to buy some lace, but polyester lace is so stiff and scratchy and I don’t want to have that anywhere near my skin while I’m sleeping. So right now I’m thinking that I will crochet some lace with cotton thread and apply it once I’m done. Which could be awhile because the pattern requires 2.5 yards. I’ve been dying for a crochet project, though, so it will be nice to have something to do with my hands while we watch TV in the evenings besides obsessively clicking back and forth between Facebook and Twitter (which really isn’t that exciting of a pastime). 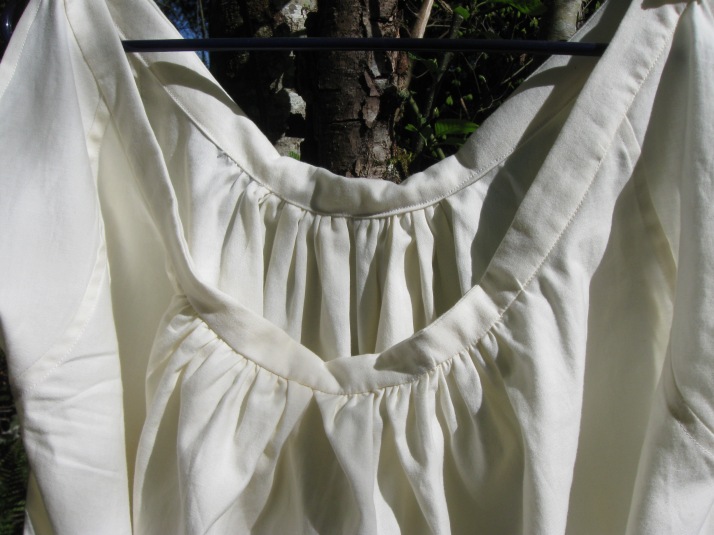 So here it is, all done. I kind of want to go to bed right now just to have a reason to put it on.

I apologize for making lightweight, summery blouses this week. See, I got all excited with the recent sunshine and light breezes and remembered the springtimes of my youth in Colorado. It’s a fascinating place. It has what we call “seasons.” I know, right? It’s not just a myth! There really are places out there that experience different kinds of weather at more or less predictable times of year.

Well, you’re right, we have predictable weather, too, and I suppose it could be argued that we have something resembling seasons. Y’know, Rain and Not Rain. And when the sun came out last week, I suppose it goaded me into thinking that perhaps we were on the verge of Not Rain (even though I know intellectually that Not Rain doesn’t begin until July). I got out the floaty, flimsy fabrics and scared the sunshine right off.

The appearance of flowers is the only way we can tell the difference between Rain in October and Rain in April.

So now I know what I need to do. I need to go back to making sweaters. I know that will mean that my wardrobe will be off-balance, but for all the rest of you pasty (and sparkly?) PNWers, I’ll do it. I’m just that kind of person. Besides, I’m cold most of the time, so I can handle wearing a sweater in 70 degree weather.

So, when the sun comes out, enjoy (don’t get burnt), and think of me. Knitting sweaters.